One learns a language to speak with a people and/or read their writing. All languages are useful to someone who has some use for them, though in general not all languages are equally useful in the abstract. Putting aside native vs. non-native speaker divides (which are hard to account for), languages are put to use.

India and Pakistan share Urdu/Hindi/Hindustani, though of course with dialects. Indonesian/Malay is similarly shared by Malaysia and Indonesia. Bengali is shared with parts of India and Bangladesh. German is similarly mostly regional with a handful of countries.

Other languages are much more multi-national, but also have a wide range of dialects, such as Arabic. Spanish is similar but even more widely spread. English fits into this same range of dialects across three continents (four, counting South Africa). Portuguese is more or less similarly distributed, as is French, that is in multiple countries throughout the world, and as a first and second language.

According to Ethnologue, there are 7,139 documented living languages currently, with 4,065 having a developed writing system.

By some estimates there will be half that by 2100. One linguist claims that 90% of currently living languages may be disappear by 2050. The main drivers are migration, and the fact that languages die if they are not taught to children. Skipping one generation is all it takes.

For travel, business, and science the lingua franca is English, which also likely has the most speakers. The anglophone countries have the largest share of the global economy.

Africa is riven by its anglophone and francophone past, with French-speaking population eclipsing that of the English-speakers by 2050. 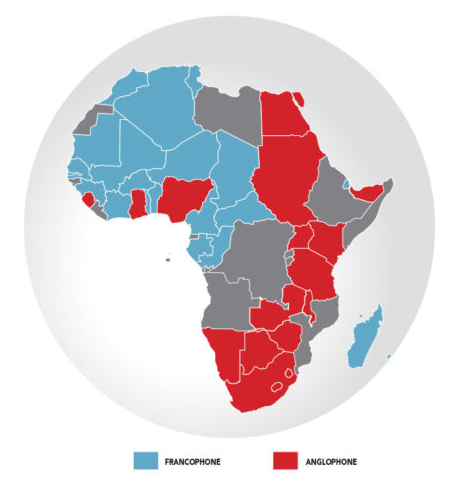 In terms of use on the Internet, the top languages listed here mostly find their way to a similar ranking. Increasing Internet penetration increases will drive this as well.

Interestingly, the land area that a Language is used in is not the same as the population, and is in the following rank order:

For travel on a global scale, Russian has much more heft to it, nearly twice that of Chinese. It is also much more broadly spoken than in just Russia and Belarus, and is at least a minority language in at least 13 countries. Russian is also similar to Ukrainian (they have a common linguistic ancestor), with about the same similarity as English to Dutch.

These following five languages could immediately be followed by another five, but we stop before more-or-less national languages, though one could include those with a large number of speakers (Chinese, Hindustani, Russian). To be honest, the isolationism of China, and the widespread use of English in India/Pakistan, makes Chinese and Hindustani largely irrelevant. One could add German as its importance in Europe, so that makes it a regional language.

Of course Hindustani, Indonesian, German, Japanese, etc. are all important languages, but more restricted in their use. It really depends where you live, whom you wish to speak to, and what you want to read. If you are in Thailand, Vietnam, South Korea, well then a different language is of higher importance.